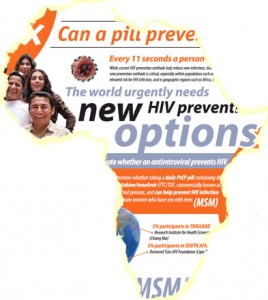 (Updated 08APR11) – One of the biggest breakthrough in HIV clinical research, since the outbreak of the epidemic 30 years ago, is the recent success in a clinical trial of a new HIV prevention approach based on the daily use of the antiretroviral drug Truvada by HIV negative person to prevent HIV transmission (Called PrEP, for Pre-Exposure Prophylaxis).

The results of the iPrEX trial raised hope but also many questions and concerns as showed by the ensuing debate about what the next step should be. Divergences culminated with the Aids Health Foundation (AHF) petitioning the FDA not to consider Gilead’s request for a licence to use Truvada for the prevention of HIV infection and a joint counter response by a number of HIV advocacy organisations. Despite differences, the debate emphasises the importance of the discovery and confirms that we have a very vibrant community of both HIV advocates and clinicians passionate and determined to find a lasting solution to end the HIV epidemic.

But for me as an advocate and an African living in Europe, the most important thing on my mind is “Will Africa be able to access PrEP?” Providing ARV to HIV negative people in Africa needs to be considered in light of the challenge of accessing treatment in Africa, where more than 50% of HIV positive people in the world live (UNAIDS report).

During a community forum organised by AVAC in parallel to the CROI conference in Boston, Julie Davids from the HIV Prevention Justice Alliance asked about the future availability of PrEP for those who needed it most, stressing the danger of PrEP being a “boutique intervention available only to the privileged few”. This point was later repeated by Jim Pickett, director of advocacy for the AIDS Foundation of Chicago, who added that “PrEP is an intervention that has a number of moving parts that all need to be working for it to be safe and effective”. Shouldn’t one of the main concerns be to ensure that the drug would be available for those who need it worldwide? With an estimated cost of the Truvada put at $36 a day or up to $14,000 a year (in the US), what are the chance of millions of poor people in Africa to access what might be a life saving drugs?

What’s more, the new EU trade agreement with India on intellectual property on ARVs and generic drugs that is set to extend protection of Intellection Property for innovation and drug research, will limit further the production and availability of generic drugs in low-income countries. If the war of intellectual property between EU and India is anything to go by, then it is obvious that as far as Africa is concerned, PrEP will most likely be a “boutique intervention” and just another dream for Africans. With African countries currently providing the testing grounds for new HIV prevention approaches we should therefore ask now how and what advocacy can do to ensure that Africa will benefit from contributing to the development of these new interventions. Though this might be a very big question, it will need a proactive African advocacy and the recognition by other well establish advocacy organisations that their advocacy efforts, as well as their concerns, need to go well beyond their borders and that what they advocates (more research, more options) have an impact beyond their borders. Western advocacy for PrEP needs to extend to the rest of the world and take into account that in many African countries advocacy is still in its infancy or does not even exist at all.

Even if PrEP drugs become available, what are the mechanisms in place to ensure that it will not be tribalized in a continent where there are some indications that access to ARVs is based on political and ethnical loyalty and where there are evidences of bribery at the delivery point, misused of funds and a non-negligible ARVs black market leading to ARVs being dispensed to increasing numbers of patients at the periphery of the health system. One has to be skeptical about the PrEP implementation process in this context.

The whole idea of PrEP is to make it available to the person that needs it most. In Africa the dynamics of “people that needs it most” is different from America and Europe. For the latter, the most at needs group is Men who have Sex with other Men (MSM), but in Africa HIV transmission is mostly through heterosexual sex and new infections occurs mostly among young women aged 19-24. However, research  has shown (when available as this is a difficult area to research) that the ongoing and increasing criminalization and stigmatisation of MSM all over the African continent results in a higher number of infections in this group than national average. Therefore MSM are becoming a growing concern for HIV prevention as it is very hard to reach MSM and deliver services, thereby failing to control an important part of the epidemic.

PrEP might be a good thing, but the underlying issues of access, human rights, cost, political and moral will power to act will not go away. Despite hope and guidelines designed for countries who could eventually afford it, the people that most need it in Africa will not have access to PrEP before long. If PrEP becomes the basis for prevention as we have seen with condoms, or even just part of HIV prevention, then Africa is not ready for PreP, and that will be another missed opportunity. The forthcoming International Conference in HIV and STI in Africa ICASA 2011 which bring together African advocates, clinicians, government officials and international advocates, and will be a key event to discuss PrEP in Africa and might, hopefully, prove me wrong.

PrEP: for whom are these pills?
Tagged with: Africa, NPT, PrEP, Strategy

6 thoughts on “Is Africa Ready for PrEP?”