In less than 18 months 6 clinical trials investigating the potential use of HIV antiretrovirals (ARV) for the prevention of HIV acquisition have rocked the HIV prevention world. First it was the South African CAPRISA announcing in July 2010 a 39% risk reduction of HIV acquisition in women given a vaginal gel containing the anti HIV drug tenofovir. Then it was iPrEX a study conducted with Men who have Sex with Men (MSM) and transgender women announcing in November 2010 a 44% reduction in the risk of HIV acquisition for those taking the same drug but orally.

Both trials where investigating the potential of ARV to prevent HIV acquisition in HIV negative people in a new approach to HIV prevention called Pre-Exposure Prophylaxis (PrEP).

Then the FHI-led trial FEM-PrEP trial announced its orderly closure in April 2011 due to futility; the trial would not have been able to show that oral Truvada, a combination of two HIV antivirals (tenofovir and emtricitabine) could prevent HIV acquisition in heterosexual women.

Then the Microbicides Trial Network (MTN) announced  in September that the VOICE (Vaginal and Oral Interventions to Control the Epidemic, MTN003) HIV PrEP prevention study was discontinuing the daily oral tenofovir arm of the trial because of futility (the trial could not have shown that tenofovir reduces the risk of HIV acquisition and raised questions about the importance of study population and human behaviour on ARV efficacy).

“The VOICE study did not confirm the 39% protective benefit of tenofovir gel which was reported from the CAPRISA 004 study” wrote Sharon Hillier and Ian McGowan, MTN investigators.

Much of the attention drawn by these trials focussed on the point estimate efficacy for ARV to prevent HIV infections. But not so much attention may have been given to the confidence interval around these point estimates (which represent our best guest about product efficacy).

The figure below shows the potential effect range of ARVs investigated in past PrEP trials based on the confidence interval surrounding the point estimate efficacy. HPTN 052 which investigated the potential of ARVs to prevent transmission from HIV positive to HIV negative by putting the HIV positive on treatment whatever his/her CD4 count is included for comparison. HPTN 052 is a different approach based on the use of ARV for preventing transmission rather than aquisition. 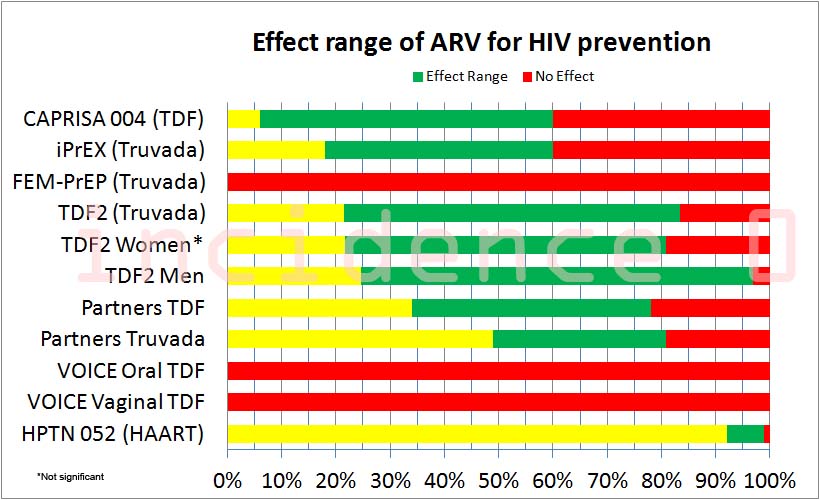 Of course, this is only a visual representation, not a meta-analysis, but it still can tell us something: that such a broad range of effects using the same products but in different populations and contexts suggest that PrEP does not offer universal protection. Such effect can only be explained by the contribution of a number of factors affecting the power of ARVs, which we know can keep the virus in check in HIV infected people, to prevent HIV aquisition in HIV negative people.

Differences in population, age, sexual behaviours, but also and most importantly adherence to pill taking for which personal circumstances most probably play a critical role. For instance, compare the situation of a serodiscordant couple where the HIV negative knows (s)he is at risk of being infected and the HIV positive knows (s)he may infect his/her partner (TDF2). Compare this to a younger, freer population, who may feel less at risk of being infected (VOICE) . Add the context, a randomised double blinded trial in which participants do not know what they are being given and may lack the motivation to take/use daily what may just be a sugar pill. Biological, physiological and pharmacological factors are also important, affecting the amount of ARVs in relevant body compartments (vagina, rectum, blood).

Presented this way, completed or closed PrEP trials appear in a different light, with an overall effect ranging from 6% to 94%, from nearly no effect to a near full protection potential, but where is the truth? As similarly observed by Gus Cairns at aidsmap “If the true efficacy [in CAPRISA] was lower than the observed efficacy, then results from CAPRISA 004 and VOICE are not totally incompatible.” By comparison, HPTN052 trial shows a very tight and powerful efficacy ranging from 92% to 99%.

There are a number of PrEP trials ongoing and planned, including one with Injecting Drug Users in Thailand, iPrEX Ole an open label study following up in the steps of iPrEX, the South African FACTS studies aiming at confirming the results of the CAPRISA 004 and the MTN 017 Phase II rectal microbicide trial (the first of its kind and much needed trial).

There is no doubt that the closure of both the oral and vaginal arm of the VOICE trial is going to raise questions about the rational to carry on with these trials. The reaction of the funders to the up and down of PrEP remains uncertain. But most importantly, what about the civil society and the end users of ARVs at a time where the Global Fund is forced to cut back on HIV, malaria and TB grants?

It is difficult to predict what will happen or to decide what should happen. It may be the sign that we need to step back and reflect on a year of successes and defeats, of hope and despair and now confusion and take the time to think carefully about what we, as a community of users, advocates, researchers, funders, government officials, should be doing next.