Optimism as Prevention: THT launches new campaign that “can halt HIV within a generation”

Today saw the launch of a new HIV prevention campaign in England by the Terrence Higgins Trust. The premise is bold: England “can halt HIV within a generation”.

The campaign is based on an over-arching message that is simple: test regularly, treat, use condoms (and participate in community action). The news was spotted first on the BBC website before the campaign website went up (THT press release can be found here). 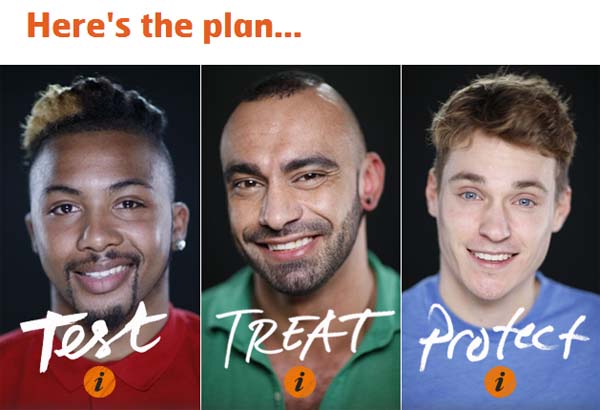 There is a definitive aura of confidence and optimism surrounding this new campaign which appears to be an extension of the previous THIVK campaign focussed on testing (and which seems to have ended according to a THT Tweet).

Though not obviously stated, the rational for this new campaign is the growing body of evidence showing that HIV treatment is safe, effective and can reduce onwards transmission when taken correctly. This is the now well-known and at times controversial Test and Treat approach (aka TasP, T4P, UTT and T’n’T).

First articulated in 1996 by David Ho (“Hit hard, hit early”), TasP remained in the shadow of other often failing interventions until the seminal modelling paper by WHO Reuben Granich published in 2009 in The Lancet. The model suggested that an intensive implementation of testing followed by immediate treatment could end the epidemic within 5 years.

Since then,the HPTN052 trial (conducted in serodiscordant couples and the results of which were published in 2011) as well as a large number of studies looking at direct and indirect benefits of early HIV treatment, irrelevant of CD4 count, have provided support for TasP both as treatment and as prevention (with numerous caveats discussed on this blog and elsewhere).

The interesting aspects of the new THT campaign are its upbeat feeling, its emphasis on individual responsibility to make it happen and its focus on gay men and black minorities that overall remain the most vulnerable to HIV infection in the UK.

The stress on testing is based on a decade of data recently presented by Valerie Delpech, (Health Protection Agency, London) showing that  there was a sustained level of undiagnosed MSM in the UK responsible of a large majority of new HIV infections in that group. The data also showed that increased treatment uptake did not lead to a decrease in new infections, challenging the assumption behind the campaign.

Knowledge of one’s status can trigger behavioural change and also lead to entry into care where treatment, which lowers Viral Load, will play its prevention role.

Treatment is still recommended for individuals with CD4 count below 350/mL, but once diagnosed, the 2012 BHIVA guideline recommends that following discussion, if a patient with a CD4 cell count >350 cells/mL wishes to start treatment to reduce the risk of transmission to partners, this decision should be respected and treatment be started.

However, despite substantial progress and a “cascade of care” that looks much better in the UK than the US, there is no evidence of a reduction in the number of new infections every year in the UK.

A number of reasons have been put forward in an attempt to explain this observation: decreased condom use (few meaningful data available), high rate of undiagnosed, low testing rate, other STIs…).

Overall the campaign calls for more people to undergo regular testing so that new and in particular recent infections are diagnosed, and for people to be offered  treatment and hopefully willing to take it so that TasP delivers as a prevention approach.

Beside this, condoms are still promoted as the best barrier against HIV whilst other approaches are evasively refered to.

In 2012 The International Association of Physicians in AIDS Care (IAPAC) announced its full embrace of two new HIV prevention interventions – treatment as prevention and pre-exposure prophylaxis (PrEP),  calling for “immediate integration of these interventions into the existing HIV armamentarium as a means of significantly impacting HIV incidence worldwide.” However adding that ‘…more research into its effectiveness on the population level as well significant will, new resources, community involvement, provider support and individual commitment to provide the increased levels of HIV testing, linkage to and retention in care, access to quality treatment and adherence – all of which are critical to achieving TasP’s promise’.

It seems that THT and HIV Prevention England (HPE) the new national HIV prevention programme for England have somewhat embarked on delivering Test and Treat, though discretely (it does not show up prominently on the THT  front page, but there will be a Facebook Page!  And online gay news outlets have mostly reproduced the PR). This, whilst the PopART community randomised clinical trial aiming at answering and addressing many of the concerns raised by the IAPAC members is just about to start in Sub-Saharan Africa. This is not to say that TasP should not be implemented, but that its implementation should be very well thought through, especially in vulnerable populations.

Limiting the campaign to England, that part of the United Kingdom south of Hadrian’s Wall, may hinder its ability to deliver (but this is the results of the political agency of the kingdom) and the message, rather than over-arching may just be over-simple, remaining mostly about testing and condoms.

New prevention technologies such as PrEP but also engaging actively in advocacy for the development of other approaches such as rectal microbicides remains alien to HIV prevention in the UK. Here, prevention is still commissioned by the government, confined to and created by NGOs, rather than emerging and being crafted by the communities which are supposed to play such a crucial role in prevention as much as being its beneficiaries (“Testing is good for ALL OF US” say the website, designing campaigns should be the work of ALL OF US).

Community involvement remains minimal; they are asked to join the bandwagon now that the campaign has started. With the fast and dramatic changes affecting HIV prevention in the UK (now devolved to local councils), whether this is the best time and the best way forward to implement TasP remains open to question.

Comments from readers of Pink News are critical of the London-centric approach (though London has a much higher ratio of HIV infections than the rest of England) and its lackluster proposal; a reader noted that “the HIV prevention message [is] being warped from “condoms always” to “Test! Test! Test.”

The programme has two years to prove that it can reach those undiagnosed who are driving the epidemic and beyond that ensure that they enter care and are provided with the support needed to newly diagnosed people. Getting people to test is a major step towards controlling the epidemic, but it won’t be enough. As shown in the UK and the US, the cascade of care is still very much leaking and the number of people with a controlled viremia, which is at the heart of TasP, still remains insufficiently low for the approach to deliver.

The optimism of the campaign is appealing, though somewhat naive. It may hopefully help destigmatising HIV, testing and treatment. Its emphasis on personal responsibility is welcome but will not always appeal to those most vulnerable, and ultimately, taking control of the epidemic will need more than just test, treat and use condoms.

2 thoughts on “Optimism as Prevention: THT launches new campaign that “can halt HIV within a generation””