Thai tenofovir study for HIV prevention amongst IDU shows PrEP works but who will benefit?

The Bangkok Tenofovir study published in The Lancet was conducted by the US CDC, the Bangkok Metropolitan Administration and the Thailand Ministry of Public Health through 17 Bangkok drug-treatment clinics. It aimed to assess the efficacy of oral tenofovir (Viread) for the prevention of HIV acquisition amongst injecting drug users (IDU), a group particularly vulnerable to infection from needles sharing.

The study (fact sheet, Aidsmap report) enrolled 2,413 HIV-uninfected men and women who reported injecting drugs and adds another piece of evidence supporting the use of HIV treatment for HIV prevention.

As in previous studies adherence was key and the 49% reduction in risk of HIV acquisition calculated using a modified intention to treat analysis showed a broad confidence interval (9.6-72.2) suggesting that a number of factors may have affected efficacy (risk reduction was 74% in a subgroup analysis including highly adherent participants, CI: 16.6-94). No resistance or significant safety concerns were associated with daily oral use of the drug.

There is now no doubt that ARV used for prevention can reduce the risk of HIV acquisition in a range of circumstances, from vaginal sex to rectal sex and now through intravenous injection as demonstrated by robust clinical trials.

Remarkably, there was no difference during the first three year of the study (from randomisation). The researchers can’t explain this observation but have been able to exclude low level of adherence and changes in risk behaviour (in fact, risk behaviour decreased during the study). 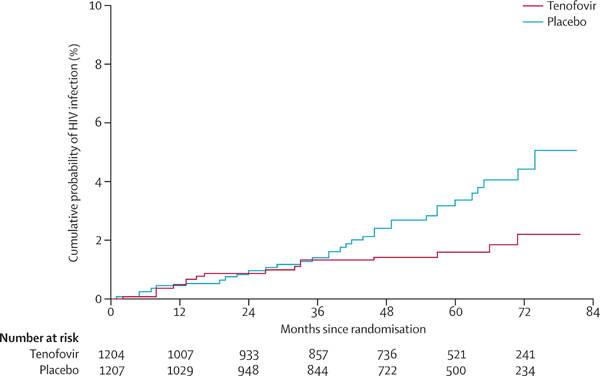 The remarkable change in risk behaviour observed during the study is in itself an achievement worth celebrating, as much as tenofovir effectiveness. It confirms that structural intervention (in the form of a comprehensive prevention package given to participants) can be powerful and successful in reducing the number of new HIV infections amongst injecting drug users (this is observable in the placebo group). Should needles exchange programmes be legally permitted, one can assume even better results and at a lower cost.

These results though adding another welcomed piece to the puzzle of HIV prevention should be considered on a background of caveats and several limitations acknowledged by the authors.

For instance, though adherence and retention in the study were high, drug sharing, even if limited when considering number of doses exchanged, was reported by 8% of the participants. More dramatically, for 16 HIV infections prevented a staggering 107 participants died of causes unrelated to HIV such as drug overdose, traffic accidents and sepsis.

But the most important question remains that of access to PrEP by IDU now that it has been proven effective, especially in Thailand where the drug has been tested, and beyond in countries where the epidemic is localised amongst IDUs.

The situation is similar to that after following the success of the CAPRISA and iPrEX trials and other following successful studies: an intervention is proven effective, but remains out of reach for those who help developed it. Meanwhile, the US CDC very promptly issues guidance for PrEP for MSM and for IDU.

This is a serious matter that must be addressed in future studies by researchers, clinicians and funders altogether. It is no longer acceptable, and some would argue it never was, that interventions and technologies shown to be effective remain out of reach from those who actually made it possible to develop them.

And this is where I strongly agree with fellow advocate Mitchell Warren when he says in the New York Times that “We should be under no illusions that these were real-world settings”, suggesting that if implemented, different outcomes could be observed in the real world

This trial is not the real world. In most of the real world IDU do not get money for each month they stay in care, they do not get money for each week they show up in a clinic or a monthly payment for filling diaries. They do not have extensive HIV education and risk-reduction counselling, methadone, HIV counselling and testing, condoms and bleach with instruction on how to clean needles. In facts these are the conditions that many advocates would like to see in the real world.

In the real world petty dealers and users, easy to arrest and to be harassed by the police, do not continue to receive treatment once jailed. In November 2012 Tom Fawthrop , Thailand-based journalist and producer, wrote that “Thai police statistics show that arrests for drug related charges have risen by 14% this year, while drug-related prosecutions have increased by 8%. Already drug offenders constitute 65% of Thailand’s incarcerated population.”

In the real world, Indonesia, Malaysia, Vietnam, and Singapore still impose the death penalty for narcotic offenses. In the real world, and in particular in countries where the virus strives amongst IDU, they are shunned upon, stigmatize, social outcasts imprisoned and even murdered. 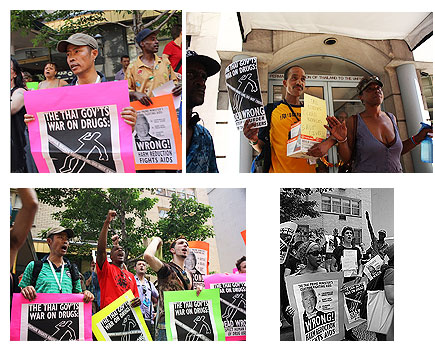 When in 2001, then Prime Minister Taksin Shinawatra embarked on his war on drug, it is estimated that about 3,000 were killed (not all were IDU or drug dealers). More than 10 years later little has changed. Yingluck Shinawatra (sister of the former PM) is in power and has made it clear that she is not changing course. Yingluck recently declared a new “war on drugs” in the name of a “zero tolerance”. In such circumstances and despite many other countries acknowledging that the punitive approach did not work, what are the chances of the Yingluck populist government, or of any of those who will follow in her steps, to offer tenofovir or its generic to Thai IDUs? (consider Russia as another example).

The hypothetical availability of a PrEP-component in HIV prevention for IDU in Thailand and elsewhere will do little to address stigma and death due to cause other than HIV. CDC Director Jonathan Mermin is right thinking that “… we’ve moved beyond competition between prevention and treatment. Even this is not for everybody” but we have not move beyond the competing rational, cost, and public perception of contested public health interventions. And if PrEP is not for everybody, it is often because it is not available to everybody.

Yes, this latest clinical study adds another stone to the Pre-Exposure Prophylaxis edifice. Yes, it shows that drugs developed for treatment can also work (and work well) for prevention in a range of circumstances. What it does not do, is to translate naturally into benefits in the real world for those who need prevention. Realising theses benefits is hampered by social, cultural, and political obstructions that reason or data will not easily sway. The approach also needs to be compared with cheaper, more broadly and structurally efficient interventions such as needles exchange programmes and social care programmes easier to implement and that have been proven to work. It is not a question of either/or/both but of assessing the “efficacy” of the direction of travel.

If, to quote again fellow advocate Mitchell, “We now need to get serious about making PrEP available to those who can benefit”, we first need to engage in a political battle for the decriminalisation of drug users and in a social transformation to address social stigma associated with the practice. There is danger with moving too quickly into harm reduction programme when social and political contexts do not allow realising the benefits of research. The results of clinical research do not provide political answers to social and structural ills.

The journey will be long and difficult and it is not the content of the backpack that will matter but the strength and skills of the walkers.

PrEP: for whom are these pills?
Tagged with: CDC, IDU, PrEP, Thailand