As a follow up on yesterday’s posting about the forthcoming legalisation of HIV home testing, I’d like to look into a French study investigating access to and use of unauthorised online HIV self-test by Internet-using French-speaking MSM. The study was conducted in 2009 and the results were published in March 2012, which make them slightly out of date but still rich in lessons to learn.

As in the UK, the distribution and sale of HIV self-tests is not authorised in France. However, HIV self-tests are readily available online. This is the one reasons why legalisation is in itself justified, so that their sale can be regulated to ensure that the products are providing accurate and reliable results. But how this is done and what it will achieve remains unanswered questions.

The study was conducted by Tim Greacen and its results are summarised in the figure below. Briefly a survey was conducted over 12 weeks early in 2009 and promoted though an online banner and/or emails. Respondents who clicked on the banner or email link were redirected to an online questionnaire comprising 93 questions that took on average 23.2 minutes to answer. This is a long time and requires some dedication from the respondents. 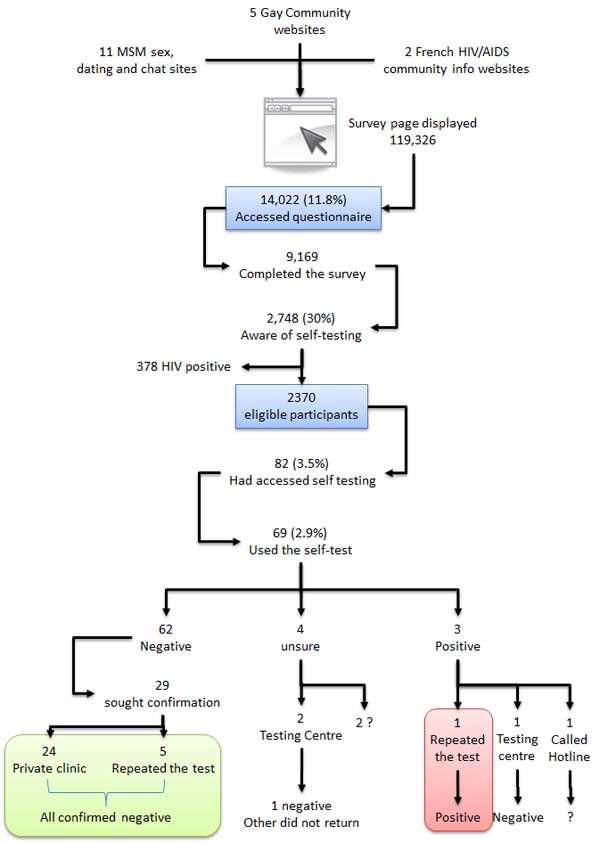 First, that the researchers have been able to advertise this study online so broadly is a remarkable and worthy achievement. Access to the questionnaire, i.e. visitors clicking on the banner or email link, was relatively low but comparable with other similar initiatives. The researchers acknowledged a potential bias toward selecting visitors interested in self-testing.

Awareness of self-testing for HIV was limited with 30% of the respondent knowing about it, but this may be explained by a study conducted 4 years ago and to language limitations (Sites offering testing kits are predominantly in English).

Of the 14,022 who accessed the questionnaire only 2,370 were eligible for the study after exclusion of incomplete questionnaires, of those HIV positive and of those who did not know about self-testing.

82 of these 2370 had obtain a self-test and of the 69 who self-tested 62 returned a negative result that was confirmed for 29 of them, leaving 33 unconfirmed results. Remarkably confirmation was sought mostly by traditional testing.

But it is the 7 cases of “unsure” and positive results that are cause for concerns.

Firstly because of the 3 positive cases only 1 was confirmed. One positive test turned out to be negative suggesting the test had not been used properly and the other was never confirmed. Secondly, of the 4 unsure, 3 did not understand how to read the test and 1 though he had not used it correctly. Only 2 sought confirmation and only 1 had a negative result confirmed, leaving 3 participants unaware of their status, 4 including the positive one who called the hotline but who was lost to the study.

Of the three that were initially positive, none talk to a doctor about the result, emphasising the importance of managing linkage to care, which in this case did not took place.

Overall, with the participation of 18 organisations and websites and out of 2,370 eligible participants issued from a population that was considered at risk, the outcome of the study was the identification of 1 HIV infection. One.

Of course the context of this study is different than one in which HIV Home Tests would be legal but the issues raised are the same and the outcomes similar to that of a UK prospective study in which 4,500 people were invited through a gay dating site, 132 HIV test kits were requested and 73 were returned leading to 4 new HIV diagnoses.

In the UK, the number of HIV tests taken yearly in clinical settings has been going up constantly since 2009. Amongst MSM in England, HIV test coverage in GUM clinics between 2009 and 2012 increased from 42,855 to 72,706 (84% coverage) and HIV test uptake from 52,701 to 90,698 (94% uptake).  If there is still some stigma attached to taking an HIV test, these numbers clearly indicate that taking the test in a GUM clinic is acceptable and becoming more so. This is an area where there is still room for improvements but there are other settings where HIV testing can be and is performed (Gym, sauna, MSM events) and which may be less stigmatizing than a GUM clinic.

Around 25% of PLWH in the UK do not know that they are infected with the virus. How many will be identified through home testing? Can other strategies, such as community based initiatives, deliver better outcomes?

In absence of a clear and explicit framework for delivering safe, accurate and accompanied HIV home testing, and in a context of budget cuts and decentralisation of HIV prevention services to local authorities, the question of the value, effectiveness and return of HIV home testing is a burning one. 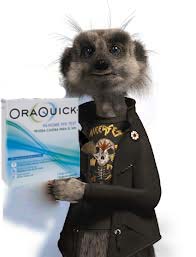 More worrying is the unpalatable thought that home testing would come to replace part of testing  in clinical settings as a cost saving measure both locally and nationally. If HIV testing “in the comfort of your home” is just one option amongst others, it will be important that it does not become the main option for HIV testing.

NAT twitted today that those who tested positive will be sign-posted to care services. The French study show that this may not be enough and that a more structured support will be needed. THT also twitted to reassure those eventually coerced into testing that this was a crime that can be report to THT direct. The feeling here is that there is little readiness should the sale of HIV home tests be promptly made legal.

The French and other similar studies point towards the need for a very cautious and structured approach to home testing for HIV and for pilot studies that are culturally and contextually sensitive to be conducted before national roll-out of what could be a costly and lame intervention.

On the fence: HIV home testing
Tagged with: HIV testing

One thought on “HIV Home Testing: Not a free cuddly toy”