As a volunteer for a charity that support people living with HIV, I have the opportunity to contribute to the induction of new recruits to whom I deliver an oversimplified HIV 101 Class emphasising why HIV still matters in 2013 England. I usually start my talk by cracking a joke or two and by asking who does not know what HIV and AIDS stand for. Typically a long silence follows until an honest soul raises a timid hand and admits ignorance. “No worry, nowadays not many people do know, and I sometimes myself forget about it”.

Truly, 30+ years into the epidemic and what percentage of the population do remember what these two words stand for instead of what they have come to mean in the public collective?

Anyway, this anecdote is an opportunity to state loud and clear that “S, in AIDS, does not stand for Stigma”. Circumstances would have you think otherwise.

A search today in PubMed[i], one of the major databases of peer-reviewed scientific publications returned 2,257 articles including the words HIV or AIDS and stigma in their title and/or abstract (click here for a real time search). This may not seem much over a thirty years period (1983-2013) but 80% of these papers have been published since 2005, that is during the last 8 years (which remains disproportionate even taking into consideration the relative number of publications on HIV during the same period). 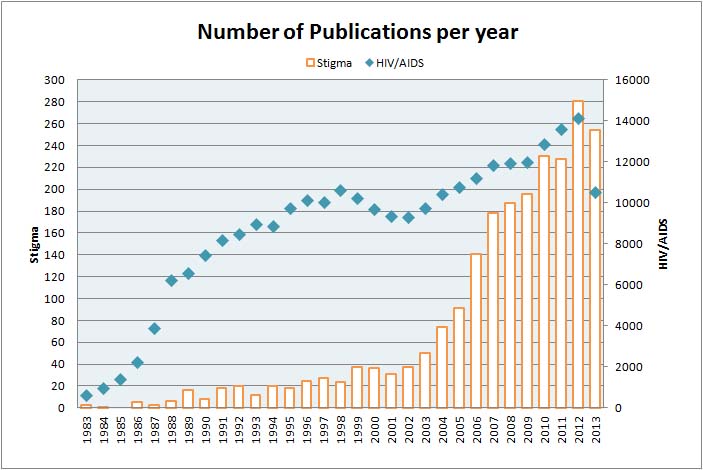 On the one hand, it is of concern that the issue of stigma and HIV has not been the object of more attention before 2004 (though this may largely be the result of editorial choice and because a PubMed search ignores the grey litterature). On the other, at the current pace we are on course to get a paper mentioning stigma and HIV published every day.

When it comes to HIV/AIDS our language is crippled with what can and what can’t be said because of the stigma that surrounds the virus, its transmission, its diagnosis, its treatment etc, etc, etc…  Language matters because it conditions actions and therefore what can and what cannot be done, as much as who can and who cannot do it.

See for example this article reproduced by various outlets and which reads “It is very scary and mostly humiliating to get yourself tested for HIV or STD”. But it is not only in mainstream media; Public Health Minister Anna Soubry is quoted saying that “The stigma and fear surrounding HIV may mean that some people are afraid or reluctant to go to a clinic to be tested.”

How writing and speaking about HIV in this way helps addressing the issue of stigma? How will it encourage people to get tested if we keep telling them that testing is a terrible and humiliating experience? That going to a clinic is a terrible experience? That asking information about HIV is embarrassing? That talking to your GP is not for everyone? That having an HIV test will affect your mortgage? (This one is really unfounded).

A corollary is that stigma can become the driver and the rational for interventions that would otherwise lack supportive evidence and lead to solutions for problems that may not exist, or at least not to the extent described, or which may have different root cause. It is easy to put it all down to stigma.

However, the question remains:  In 2013 England, is getting an HIV test humiliating?

If yes, we have a number of failures to recognise and address and a real problem to promptly sort out. If no, we have a fear industry to deal with, a different kind of problem but a real one to.

In 2013 it remains impossible to debate issues about HIV/AIDS without cramming notions of stigma in how we talk, think, act and react about it, whilst lamenting about how stigma is such a barrier to controlling the epidemic. The contradiction, and that part of this hindering stigma may be dialogically created, escapes those who are most concerned by it.

Several studies have investigated and reported people’s fear before they undergo HIV testing but very few have assessed their experience afterwards, and even less got as much attention despite being rich in lessons that can be used to improve services delivery.

There is not doubt that stigma surrounding HIV & AIDS exists, that it is very much real, and that it definitively affects what people of all walk of life think and do, but “with attitudes like this”[ii], which erect walls at the same time as they are trying to bring them down, how will we ever beat the stigma surrounding HIV?

Note: “industry” should be understood as in a tendency to work persistently.

[ii] This quote echoes Dr Steve Taylor lamenting on the failure of an ethics committee to understand the need to assess opt-out HIV testing startegies in the NHS, maybe because of some form of stigma?