HIV home testing may appeal to some people unaware of their HIV status and not prepared to visit a GUM clinic. However, home testing could lead to an increased attrition in the HIV cascade of care and treatment, as well as threaten sexual health and its management. Is the legalisation of HIV home testing opening Pandora’s Box? Is the UK health care system prepared to mitigate the risks?

Two recent reports are adding more information in the debate about HIV home testing and its potential outcomes when legally available from April 2014 in the UK.

The first is a study by Christopher Pilcher published in PLOS One which investigated the performance of a number of HIV point of care tests (Summary from AIDSmap).  The second is a modelling study by David Katz estimating the effect of replacing clinic-based testing with home-based tests on HIV prevalence among men who have sex with men (AIDSmap report here). Both studies were conducted in the US in geographically limited areas.

The first study showed that different HIV testing kits performed with substantial differences (unsurprisingly). Remarkably, the FDA-approved and market leader OraQuick Advance was unable to identify acute HIV infections which are suspected to play a key role in the ongoing epidemic amongst gay men and gave a correct HIV positive results in only 86.6% of all the case (saliva test). The second study, Katz’s study, concluded that replacing clinic-based testing by home testing could lead to more infections amongst MSM. The two approaches to testings are not mutually exclusive but one may well come to replace the other.

Taken together, the use  of  poorly performing  HIV testing kits at home could have a detrimental impact on the effort to reduce HIV incidence, leading to increased risk of transmission, increased prevalence and contributing to increased attrition in the HIV cascade of care/treatment.

The impact of a poorly managed HIV home testing strategy can be better understood looking at how and where it could impact the HIV cascade of care and treatment in the UK. 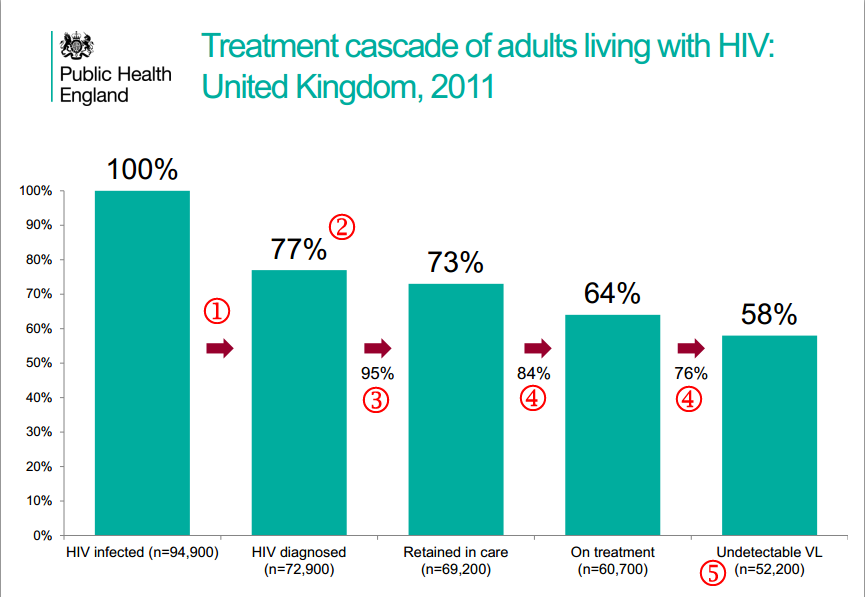 What HIV home testing could do is

But this is not all. It is important to look beyond HIV testing alone to understand the true extent and impact HIV home testing could have on the sexual health of the nation and its management.

An added-value of clinic-based HIV testing is that people are also tested for a whole range of other sexually transmitted infections. Testing is often tailored to people based on their sexual activity and practice. Hepatitis B and C, Syphilis, Gonorrhea, and Chlamydia infections are on the increase in the UK.

By testing in “the comfort of their home” users may actually contribute unwillingly to an increase in the number of STIs other than HIV. Taking into account that the presence of a pre-existing STI has been correlated with increased risk of both transmission and acquisition of HIV, are we sleepwalking into a disaster?

Testing in clinic is also an opportunity to address other health concerns (especially mental health). GUM clinics offer psychological support beside sexual health advice. Not attending a clinic will lead to less opportunity to offer people and those most vulnerable to infection with the help they may seek or need.

This may indeed sound like a disaster scenario, but the real disaster is that in a few months, a tool that could contribute to improve the health of the nation may indeed led to the exact opposite because none of the above has been thoroughly considered of thought through. Though inevitable, the decision to legalise HIV home testing has been based on limited and inadequate research and despite research predicting low uptake and weak contribution to improving diagnosis (at the same time, research investigating HIV home sampling in the UK has shown much more promising outcomes).

Plans to mitigate the risks arising from the legalisation of HIV home testing are found wanting. National prevention organisations and public health organisations are still not engaging seriously with the issue. Community preparedness, mechanisms to ensure linkage to care, and psychological support remain elusive.