Clinical Research: I am HIV positive and very much healthy, thank you.

The participation and contribution of healthy human volunteers in clinical research is key to the successful development of new approaches to HIV prevention. But what is a “healthy volunteer”?

The successful development of a HIV vaccine or of a New HIV Prevention Technology (NPT, such as microbicides, or Pre-Exposure Prophylaxis) as well as behavioural interventions rely on volunteers’ willingness to participate in research studies, giving and committing their time, and sometimes putting themselves at risk, for their benefit but also for that of others.

Early stage HIV vaccine research is one of the areas of clinical research where the immediate benefits from participating in a study is far to be obvious. Indeed, Phase I vaccine research is mostly concerned with the safety of new vaccine candidates and their ability to trigger an immune response, rather than with their effectiveness. Human participation in this type of research is one of the most altruistic, as ethical guidelines proscribe remunerating volunteers who engage in research for more than the time they give and discomfort they may experience during the course of the research.

These early phase studies typically recruit “healthy volunteers” into trials that are often long and demanding and with outcomes and benefits that may not materialise before many years. Recruitment is then an ongoing challenge which is more demanding than recruiting volunteers for research conducted with people affected with a disease, more accessible through care and for whom there may be a more direct and immediate benefit if the research is successful.

There are currently a number of early phase HIV prevention studies recruiting in the UK (especially in London) which are struggling to recruit “healthy volunteers”. Many organisations have realised that Social Media offer an opportunity to publicise clinical research and to extend recruitment beyond the traditional spheres of hospital staff and students. But the use of Social Media is still in its infancy and an uncharted territory for many and whilst sites likes Twitter and Facebook may facilitate the engagement with the public, they can also highlight the divide between research and the public.

Not so long ago, a tweet from Help Make History, a website set up to build a network of volunteers who would, in principle, be willing to participate in HIV prevention trials triggered a public response that led to some interesting and challenging discussions. 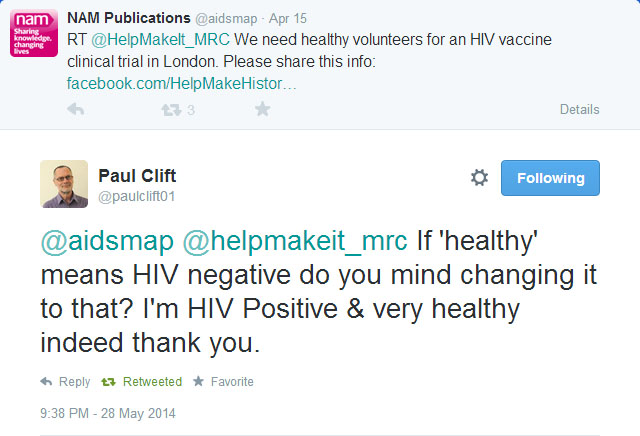 Are you unhealthy if you are HIV positive? Or is clinical language further obstructing social and prevention interventions that strive to convey the message that being infected with HIV is no longer a death sentence or associated with being unhealthy?

The Royal College of Physicians defines a healthy volunteer as an “individual who is not known to suffer of any significant illness relevant to the proposed study, who should be within the ordinary range of body measurements, such as weight, and whose mental state is such that he is able to understand and give valid consent to the study”. It is accepted that a healthy person who agrees to participate in a clinical trial is doing so for non-medical reasons and will receive no direct health benefit from participating.

But the definition of being healthy is open to debate and depends on the study conducted. Different clinical studies have different selection criteria (called inclusion and exclusion criteria) even if seeking “healthy volunteers”.

In the case of an HIV preventative vaccine, a key element of the definition of  healthy(for the time being) is that the volunteer is HIV negative, but does not stop there. For example, one of the study currently seeking healthy participants requires individuals to have a Body Mass Index (BMI) between 19-28, to be at low risk of HIV infection, and is excluding pregnant women, people who had tanning sessions or excessive terminal hair growth, along the usual criteria supporting physiological body functions and mental capacity.

Accordingly, the clinically obese, sexually active gay men, those back from holiday under the sun and hairy people would not be eligible. As esoteric as these criteria may seem, there is a rational for each of them and there is no particular emphasis on being HIV negative, though it is a fundamental exclusion criteria.

However, despite good intentions, the use of “healthy” may fuel the myth that being HIV-positive means being unhealthy and may contribute to the stigma associated with living with HIV. Paul Clift, well-known and respected HIV/Health activist who reacted to the tweet kindly agreed to answer a few questions on the subject.

In that regards, and as noted by Paul, recruiting and selecting volunteers would benefit from being entirely separate processes. This would help creating comprehensive registers of volunteers that could participate to different studies.

It is worth noting that to ensure that all advertising materials and methods used to recruit human subjects are appropriate, organisations conducting clinical studies need to submit these to an ethics review committee and obtain its approvals. This does not yet extend to how social media such as Twitter and Facebook are used as recruitment tool, though their proposed use should be stated and approved when applying to ethics review committees. However there is no need to do so with a bit of common sense; the same principles should apply to Twitter and Facebook as would apply to a printed advertisement.

Language is not neutral but laden with preconceived ideas and associated meanings. Exclusion and inclusion criteria can be perceived as arbitrary and enrollment in clinical studies is known to be biased (for example often excluding women ). Though there may be an immediate or practical rational for making such choices and formulating them in a particular way fitting a particular study and communication medium, it is not always in the best interest of the research.

Raising awareness that words have negative connotations, even amongst those familiar with HIV research, is not being overly sensitive but is contributing to a global effort to get rid of inappropriate use of language. It is not about political correctness or about banning the use of words which meaning is ever-changing, but about nurturing mindfulness that some words may better not be used in particular contexts. This is where engaging with the public in the design of advertisement campaign could prove useful.

It is nowadays accepted that research would progress much faster if the public is involved from an early stage. This is why Patient and Public Involvement (PPI) is becoming an integral component of research, one encouraged by the National Institute for Health Research (NIHR). Public involvement in research can be defined as research being carried out ‘with’ or ‘by’ members of the public rather than ‘to’, ‘about’ or ‘for’ them. This includes, for example, working with researchers to plan studies, offering advice as members of a project steering group, commenting on and developing research and communication materials.

The emergence of new social technologies is affecting the interaction between researchers and the Public (See for example crowd-funded research and its recent use to raise fund for a HIV vaccine) and offers an opportunity and an instrument – though not a solution, to redefine and foster this relationship and to make it a better two-way process.

And because it is a two-way process it does not have to start from the Research side but can very well start from the Public side. So, where to start? Why not by participating in an HIV vaccine study? Just check the Help Make History Website, find out if you are eligible for a study and get involved with the researchers.