France Leads the Way with PrEP Approval 5 years after iPrEX

PrEP has arrived… in France! Marisol Touraine, the French Health Minister announced today that the drug Truvada (manufactured by Gilead) is soon to be approved for the prevention of HIV infection (Pre-Exposure Prophylaxis) .

“I welcome the publication a temporary recommendation of use of Truvada, a drug that will allow us to make significant progress in the fight against HIV”, said the French Minister.

Truvada is made available through a temporary recommendation of use (recommandation temporaire d’utilisation, RTU) which allows the prescription of drugs outside their approved use for up to three years. Manufactured by Gilead and approved for the treatment of HIV infection since 2004, Truvada will be available in France for the prevention of HIV infection in the first half of December and will be fully reimbursed by the French National Health system from early on in 2016 (i.e. it will be free). The drug will be prescribed to selected populations and within a controlled and monitored framework. 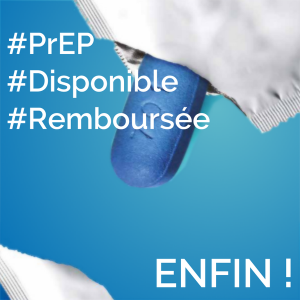 The decision follows a report from a commission of the French Agence du Medicament (The French equivalent of the UK MHRA and US FDA) and answers years of calls from community organisations, doctors and researchers to make it available to those most-at-risk of infection.

At 500 Euros (£350) for 30 tablets (a month’s use), Truvada is not cheap, but in a country where more than 600 people are diagnosed with HIV every month, Pre-Exposure Prophylaxis could make a huge difference.

France follows in the steps of the US, where the FDA approved Truvada for HIV Pre-Exposure Prophylaxis in 2012, and will be the first European country to offer PrEP. Elsewhere, PrEP is available privately or through small scale initiatives such as in Thailand.

Professor Jean-François Delfraissy, Director of the ANRS said, “I welcome the decision taken by Marisol Touraine, the Minister for Social Affairs, Health and Women’s Rights. It is a major step forward. It will allow diverse stakeholders – health professionals, community organisations, local authorities, researchers, to mobilized themselves around a new goal: eradicating HIV”,  adding that “this decision should now pave the way for PrEP approval in other EU countries”.

Meanwhile, in the UK, with 500 new HIV infections diagnosed every month, a majority among gay men and Men who have Sex with Men, the decision to provide PrEP is somewhere lost in limbo. The situation is so dire that small independent organisations and individuals have taken on the role to raise PrEP awareness and to facilitate access to PrEP, filling the gap mainstream HIV prevention organisations and a slow to act and bogged down in cost effectiveness national health system have left open for years.

It will be 5 years today the since the publication of the results of the iPrEX clinical trial which first showed the power of PrEP. A week before Worlds AIDS day and while HIV testing week opens in the UK, France has taken a remarkable and momentous step to broaden the range of HIV prevention options. Hopefully, other Europeans countries will finally wake up from the lethargy they have fallen into and simple-minded HIV prevention messages.

In the UK, 15,000 infections amongst Gay men and MSM after iPrEX, we are still waiting.