Can crowd sourcing solve the challenges posed by the HIV epidemic? This is with this bold and affirmative statement that UNAIDS started a new collaborative project to develop a global strategy to address the HIV epidemic amongst young people. The project is worthy of attention with 3,000 new HIV infections occurring every day amongst young people and with many of the 5 million of them living with HIV unable to access treatment.

The originality of the CrowdOutAIDS project is its attempt at modernising participatory research approach by using modern-day online tools and social networks whilst devolving decisional power to young people who are rarely involved in decision making processes of this kind.

Crowd sourcing has been around for about a decade with Wikipedia epitomising the result of a “free, web-based, collaborative, multilingual encyclopaedia”, built and written by mostly anonymous volunteers. The approach has been used in a number of areas, mostly related to marketing, and is even part of the UK coalition government strategy to find new way to engage with people. Its value and outcome critically rely on people’s willingness to get involved and on their ability to contribute to a common effort. This approach remains unconventional in the field of global health and raises a number of questions and concerns particularly for strategy making related to HIV.

First what makes UNAIDS think, or any other organisations for that matter, that young people are interested or willing to contribute to defining a strategic response to HIV? True, a disproportionate number of people affected by HIV are young people, but that does not necessarily means that HIV is on top of their everyday priority in life. For many young people worldwide, HIV is still a remote concern, and even when they live in a country very much affected by the epidemic such as South Africa (in 2008, an estimated 8.7% of 15-24 years old South African are living with HIV), knowledge and awareness do not necessarily make the issue a priority or a cause worth investing in, simply because everyday life is a more challenging source of immediate concerns to address. 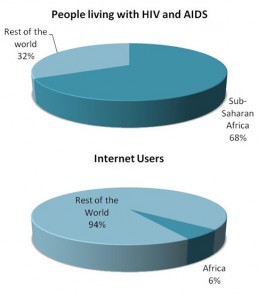 A survey of South African youths showed that for 33% of them HIV/AIDS was the greatest concern they were facing but that for 63% of them, getting a good education was a priority, with only 21% responding that protecting themselves against HIV was a priority. How many are willing to get involved in strategy making remains unanswered. Youth engagement into the project should not be taken for granted. The people behind the UNAIDS project have shown some awareness of this when writing on their Facebook page that “To develop the UNAIDS strategy on HIV and young people a clear understanding of what youth engagement and youth leadership is needed.” They should have stepped back one step further and question the notion of youth engagement itself, how to create and how to foster it. Using online tools like Facebook and Orkut is not going to be enough and this takes us to the next two points: access and representation.

An efficient strategy making process would build on those who are most at risk of being affected by HIV, not only because they have an experience to share, but also because they are the expected recipients of that strategy. It is an interesting case where recipients can also be agents of an intervention and more approaches like this are needed. But with online crowd sourcing project, being able to access the Internet is an obvious prerequisite. Despite huge progresses made during the last decade, African internet users represent less than 6% of the world users while more than 2/3 of those infected with HIV are living in Africa.

The digital divide is a serious obstacle for online crowd sourcing and the creation of an all-inclusive strategy making process. Outside school, internet at home remains the privilege of a few and access to internet comes at a cost, excluding even more people from the participatory process. Furthermore, the UNAIDS project hinges on the use of two major social networks, Facebook and Google-owned Orkut, and thought Facebook can claim more than 800 million active users, there are several billions people without access to Facebook or without a Facebook profile or an online presence, many of them being amongst those most at risk of HIV infection. Further consider national government censure, language barriers, technical issues such as speed and connection, the representativity of this crowd sourcing exercise becomes questionable.

The next major concerns to the process is that it does not address the issue of prerequisite knowledge required for strategy making (both epidemiological and technical). This is particular relevant to HIV as general knowledge about the virus and the epidemic remains superficial. A 2008 survey conducted in South Africa found that despite a “turning tide” among teenagers, knowledge of HIV/AIDS among most at risk African females aged 20–34 combined knowledge about HIV has declined from 43.8% to 26.1% between 2005 and 2008. It is rather disturbing that an HIV prevention strategy could be designed by people without first addressing a level of knowledge that remain unacceptably low in Sub-Saharan Africa as much as in the developed world.

But even if all these concerns were addressed, the approach comes with a big caveat: “the strategy has to be in line with UNAIDS mandate.”  The strength of crowd sourcing is in allowing for identifying original and creative approaches outside the limits and confines of organisational thinking and constraints. To contain beforehand the outcome of the process within the boundary of an organisation mandate makes the whole enterprise, well, senseless.

Despite being still in its infancy and very much fashionable crowd sourcing has its critics, including Jimmy Wales the founder or Wikipedia. Ultimately, crowd sourcing applied to strategy making for HIV could end up being dominated by the loudest and most persistent voices pushing forward irrelevant or even dangerous agenda without much consideration or opportunity given to those whose needs, concerns and experiences most need to be heard and taken into consideration, at best it will generate another bland document that will have minimal impact but will have ticked the box of “‘engagement of young people”

Once could question if crowd sourcing could have been better used to assess if it was an appropriate approach to strategy making for solving the challenges in AIDS response. The story of the “1 million T-shirt for Africa” provides an interesting example of a spontaneous crowd-sourced appraisal of an aid project.

Put simply, young people may and should contribute to solving today’s challenges in the AIDS response, but this is only possible if we are providing them with the opportunities and the power to do so. The role and value of crowd sourcing in that process remains elusive until further consideration is given to the context in which the proposal to use it takes place.

2 thoughts on “Can crowd sourcing solve the challenges posed by the HIV epidemic?”