After 25 World AIDS Day days, how are we doing? And do we still need a WAD?

It is the time of the year when activists and NGOs are going through the final preparation for the 1st of December, World AIDS Day  (though many will have started working on this year’s event as soon as last year’s WAD ended) the day to raise awareness about HIV and AIDS on a global scale.

WAD is nearly as old as the HIV/AIDS epidemic. It was conceived in 1987 by two WHO information officers, James W. Bunn and Thomas Netter with the approval of Jonathan Mann, then Director of the Global Programme on AIDS which later became UNAIDS. Starting in 1988 with “Communication” as its theme, the events as since adopted a new theme every now and then.

Since 2011 and until 2015 WAD’s theme has been Getting to Zero, that is “reducing new HIV infections, discrimination and AIDS related deaths to zero through increased advances and equal access to HIV prevention, testing, treatment and care.”

Every year UNAIDS publishes a report on the state of the HIV epidemic. It is a comprehensive and colourful publication that has the hard task of communicating complex and often incomplete information in a format accessible to all without dumbing it down too much.

In the recent years UNAIDS has been experimenting with various infographics, not always for the best. It is not the object of this posting to look at all the data in detail, but it is to show how even simple basic data can be presented and interpreted differently and depending if you are a “glass half-full or half-empty person” how different conclusions can be reached with the same data and what it means when it comes to WAD.

It is somewhat difficult to make sense of the UNAIDS data when the organsition uses different points of reference from one year to another. The table below shows how data from the UNAIDS fact sheets, which accompany each year’s report, are inconsistently presented. Note that some of these data do not match the figures published in the most recent 2013 fact sheet. This may be due to the data being provisional at the time of reporting and later updated, which adds to the confusion.

Looking at raw data as presented in the table below may be more informative but require some mental gymnastic to figure out exactly what is going on. 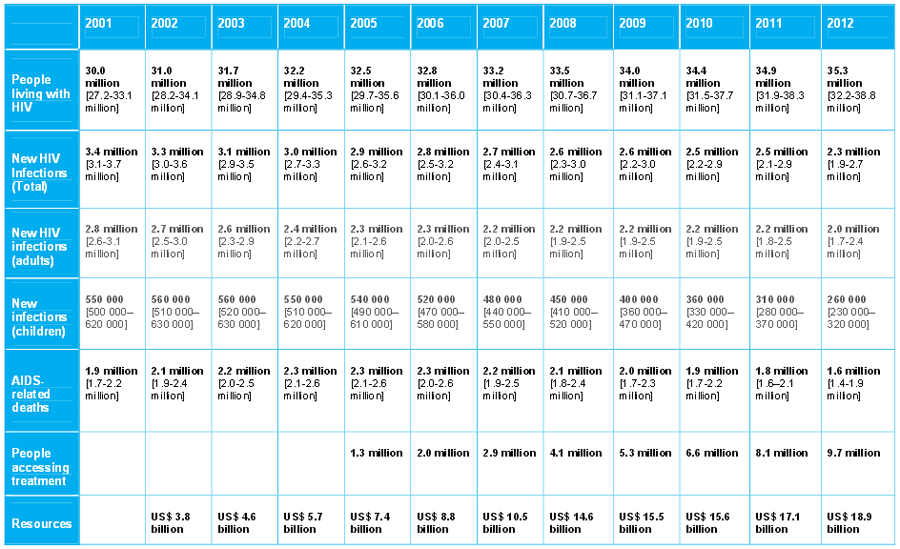 A graphical representation of some of the above data may help but again, does not really show how we are doing other than giving an overall direction, which in this case suggests that we are doing well. 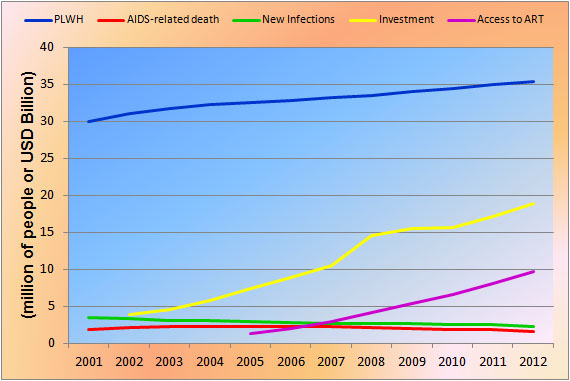 Investment is going up, more people are accessing treatment and consequently more people are living with HIV and AIDS-related death is going down. It is all good news. But how much better are we doing and are these positive changes sustained in time? to answer these question we need to look into more details. The following chart shows the same data but plots absolute differences from one year to another. This is a measure and representation that better describes how well we are doing. 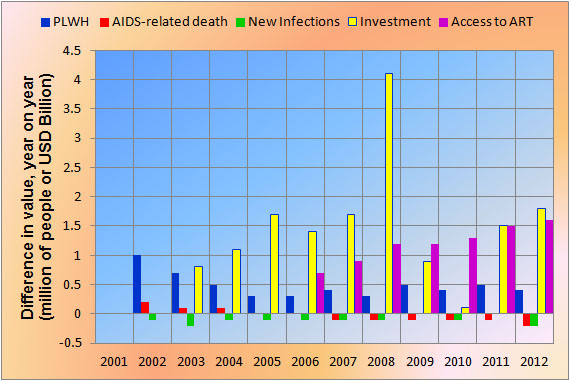 This representation shows that with the exception of the number of PLWH accessing treatment which is growing from one year to another since 2006, there has been limited change in other epidemiological variables in the past 10 years.  For example, the number of new infections fluctuates around half a million a year. New diagnosis and death are decreasing but not dramatically after a notable change of direction in the early 2000’s following the introduction of triple anti-HIV therapy. There are large confidence interval around all these numbers1 that reveals how limited our knowledge of the epidemic is and limits conclusions we can draw from the data.

Interestingly it also suggests that annual increase in investment has overall been regular with the exception of a big push in 2008 and no change in 2010. Both did not seem to have an immediate effect in the following years. This is somewhat expected; it does take time for things to change. It does not suggest that continuous lack of investment would not have an impact! This could be better understood when looking where investment goes, i.e. mostly into expanding access to treatment.

But we need to look more closely into the details, that is into the rate of change, which is what the next graph will do. 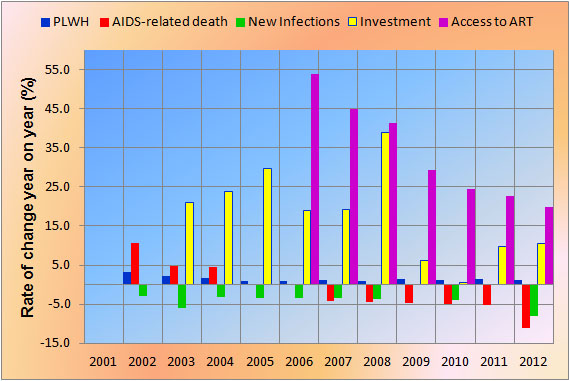 The graph shows a different picture. First, it shows that in fact we are not doing as well as other representations suggested year on year (see the first two graphs above as well as in the UNAIDS table). True, more PLWH are accessing treatment but every year since 2006 the rate at which PLWH are accessing treatment is slowing down. This is a cause for concern with changes in guidelines towards starting treatment irrespective of CD4 count2. This suggests that current approaches to deliver treatment are reaching a limit (or that something is limiting further expansion) and that for treatment to reach more people more effort will be needed or that we will need to do things differently.

It is tempting to conclude that what the past 10 years have achieved is to contain the epidemic (an achievement in itself) rather than taking it towards zero and that much more effort will be needed for this to happen. If confirmed, the trend towards a reduction in the number of new infections and of AIDS-related death could signal that we are really starting to get towards zero.

Of course measuring progress is much more complex than these representations can possibly show and they should not be over interpreted. What these representations do not show for example is the disparity (geographical, income-based and behavioural) within the epidemic. But what they show is that when WAD comes, we need to look behind the headlines and hear beyond the speeches and promises. We need to be aware that there are different and complex stories behind numbers and that triumphalism is not yet welcome. Sustained investment is still needed, new approaches to prevent infections are still needed, new ways to deliver treatment are required, changing attitudes, getting rid of outdated legislation will be what make a difference in the coming years.

The end of AIDS is not here yet and that’s why we still need a World AIDS Day.

The need to discuss a rectal microbicide agenda for Nigeria