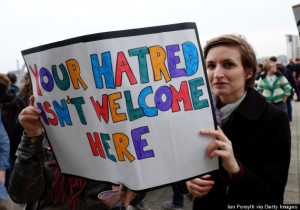 GATESHEAD, ENGLAND – APRIL 23: A woman holds a Anti-UK Independence Party poster at the start of a public meeting during which UKIP leader Nigel Farage delivered a speech in the Sage building on April 23, 2014 in Gateshead, England. Nigel Farage visited Gateshead as part of a North-east tour ahead of next month’s European elections. (Photo by Ian Forsyth/Getty Images)