86% risk reduction: Is it finally enough for PrEP to be made available in the UK?

TL;DR: PROUD and IPERGAY studies show PrEP reduces risk of HIV infection by 86% – How many more infections needed before Truvada is available on the NHS for the prevention of HIV in the UK?

It is now official, Pre-Exposure Prophylaxis (PrEP) works for the prevention of HIV acquisition in England. Concerns raised by Public Health England officials and a section of the clinical community “that PrEP effectiveness may be compromised in the real-world setting were completely unfounded”, says the PROUD clinical team (emphasis mine).

This is one of today’s major announcements made at the CROI conference in Seattle (Washington, USA) by Professor Sheena McCormack  where the results of the PROUD pilot study were presented and here are the key figures:

The PROUD results were further supported by the results of the IPERGAY study, which investigated an intermittent PrEP regimen and showed that PrEP could also reduce the risk of HIV infection by 86%.

These two studies had to alter their course in the autumn 2014 following recommendation from their independent data monitoring committee (here and here). At the time, the study’s IDMCs thought that PrEP efficacy was already good enough to recommend putting all participants on immediate PrEP in PROUD and stopping the contested placebo arm in IPERGAY.

The results are out for PrEP in Europe and beside an impressive reduction in the risk of HIV infection amongst MSM (the highest observed in a trial that closely mimics the real world), other important pieces of information are emerging from these trials.

It is often assumed that HIV affects preferentially the deprived and uneducated. This is a generalisation that was built on years of portraying the epidemic as mostly affecting the Poor and the disenfranchised because HIV affects countries predominantly in the South (by opposition to the North). Even if it has been shown that the more privileged are not immune to HIV (see for example the case of Zambia) and that the Poor are not always plagued by HIV (see the case of Banglasdesh), this is an enduring form of prejudice that hinders effective HIV prevention.

PROUD participants reported between 5 and 20 partners in the last three months at enrolment and 12 months later, with 50% of them reporting at least 10 partners in the last 3 months. However, reported condomless sex was occasional, with 50% of the participants reporting sex without condoms with 3 partners in the past three months. There were no difference between the Immediate and the Deferred arm of the study showing that being on PrEP did not lead to giving up on condoms. This suggests that participants incorporated PrEP into existing reductions strategies, rather than as an alternative to condoms. It also confirms the conclusion of a recent CDC study showing that inconsistent condoms use for anal sex is no better than no condom use at all.

This was particularly salient among the PROUD participants where incidence was 8.9 per 100 person years in the Deferred group compared to 1.3 in the immediate arm. Incidence in the Deferred group was 3 times higher than what was expected and 7.6 times higher than in the group of participants receiving Immediate PrEP. HIV transmission amongst MSM has been consistently high for the past 10 years. That PROUD shows it is much higher than what was expected will have important implications on the kind of HIV prevention interventions needed to curb the epidemic in this population.

This confirms that the level of condom use remained the same for those who were given PrEP and those who had to wait for it. Being on PrEP did not seem to increase risky sexual behaviour. These results will require further confirmation once more data are available as the analysis was performed on group of different sizes.

The use of Truvada by HIV-negative people was well tolerated and there were very few interruptions with only 13 participants interrupting PrEP, 11 of which subsequently restarting it.

Three participants developed minority mutations which appears to happen at the time they were seroconverting and started PrEP (i.e. they were infected before they started PrEP). These mutations are not expected to have an impact on the success of treatment according to current guidelines.

The reduction in the number of new HIV infections was achieved whilst delivering PrEP as part of existing health services with quarterly safety visits, suggesting the intervention will not add much burden on clinical staff.

Taken together, these results though still preliminary confirm what was previously known: PrEP works if taken. They also confirm that some of the concerns raised by those who are afraid of PrEP were unfounded and that PrEP, far from being a fad, is here to stay.

PROUD and IPERGAY add more evidence to support PrEP as an HIV prevention tools on its own rights. However, that Truvada reduces the risk of becoming infected by 86% will not be enough for those who control access to medicines or to make it available right now.

One or more cost-effectiveness analysis will be required before the NHS will consider making Truvada available for PrEP in England (amazingly, due to regionalism, Scotland may find it more difficult to make Truvada available). There will be meetings, debates and more meetings. Guidelines will need to be drafted by professional bodies, revised and issued.

Optimistically, Truvada for PrEP could be available in the financial year 2016-2017, a year from now. But if so, the burden of delivering it will rest on the shoulders of Local Authorities who in an inexplicable governmental decision held the budget for HIV prevention and are responsible to deliver interventions.

Most importantly, community engagement will be key to a successful PrEP roll out. PHE (Public Health England), HPE (HIV Prevention England), BHIVA and BASHH must not miss the opportunity to engage in a meaningful and frank dialogue with a range of PrEP users that goes beyond institutional and institutionalised stakeholders.

As for the PROUD participants who have contributed time and goodwill to the study, they will be provided with Truvada for one more year, after that, should Truvada no longer be available to them, it will be back to basics and an incidence of 8.9.

These latest PrEP results will certainly be the highlight of the 2015 CROI conference. They will, if not must, be a game changer for PrEP in the UK and Europe where HIV prevention narrowly focusses on behaviour changes and condom use. Though these have been successful in containing the epidemic they are failing to curb or quell it.

By the end of this month 500 people will have become infected with HIV in the UK, half of them MSM. How many infections could have been prevented with PrEP if it was already available on the NHS? How many could be prevented next month? And the following, and the following, until Truvada is finally available to those who chose it and are able to use it as their HIV prevention tool?

Today, we can claim that we have the knowledge and the tools to make HIV history in the UK and beyond. We should not be held back by accountants, poor leadership and lack of political will to make the end of HIV a reality in a reasonable future. 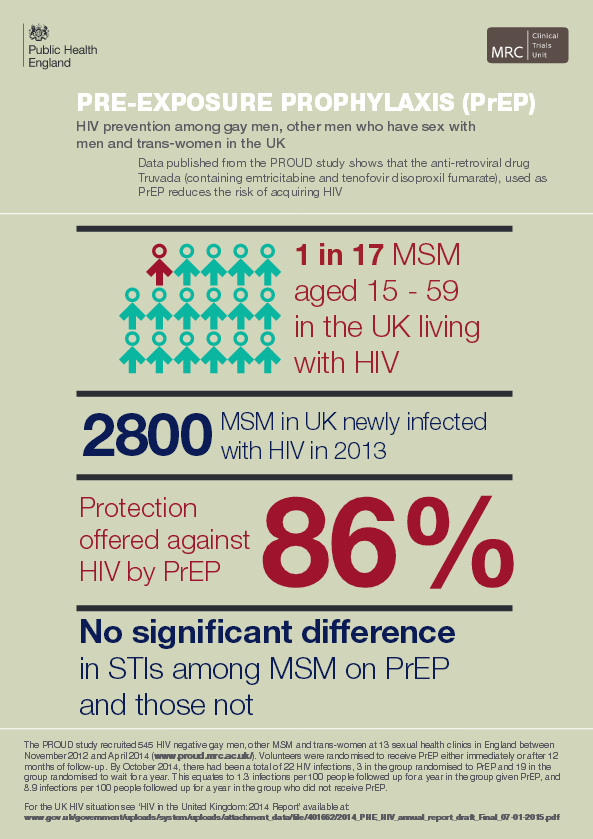 WHO recommends PrEP for MSM: Time for the UK to take note and act?
Tagged with: Conference, CROI, IPERGAY, MSM, PROUD, Truvada