Written in February 2015, an edited version of this blog was published in the Spring Issue of Baseline magazine. 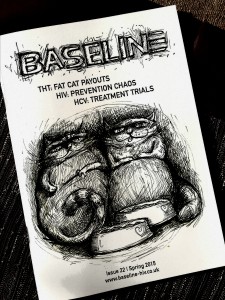 In the UK, 6,000 people were newly diagnosed with HIV in 2013, down from the 7,890 peak in 2005. This decrease masks an evolving epidemic with more heterosexual people being infected in the UK than abroad, whilst the rates of infection among Black Africans and Men who have Sex with Men (MSM) remain at an all-time high. In fact, 75% of new diagnoses are among MSM and/or in those of Black African ethnicity.

HIV prevention in the UK has been relatively successful in containing the epidemic. However, current approaches are failing to quell the epidemic in the most vulnerable groups. Increased testing, highly effective and safe treatments and progress in social and legal issues have not been sufficient to control the rate of new infections. With new HIV prevention tools available, but budget cuts looming, it is time to “remaster” the UK HIV prevention strategy if we are to reach the UNAIDS deadline of ending the epidemic by 2030.

Undoubtedly, HIV prevention, treatment and care represent some of the most complex and challenging public health problems. The drivers of the pandemic extend deeply across the boundaries of social, cultural, political and religious fabrics of our communities and societies.

For years, the Department of Health’s approach to controlling the epidemic has been to focus on primary HIV prevention (i.e. prevention that directly impact HIV transmission) and the provision of clinical services. Thirty-plus years of evidence tell us that preventing new infections requires a multi-sectorial, multidisciplinary response. This response needs to be built on research and understanding of the epidemic at all levels – national and local, population and individual – whilst acknowledging that the epidemic is changing fast. Establishing good evidence in HIV prevention and “knowing our epidemics” should guide the design of a strategic response ensuring that we are doing the right thing, at the right time, and in the right place.

The absence of a strategic HIV prevention framework coordinated at country level remains puzzling considering this was at the heart of the Three Ones Principles, which the UK helped to establish in 2004. Currently, there are no clear prevention targets, only guidelines – which are not optimally implemented. National bodies (e.g. HIV Prevention England, HIV Scotland) operate within different regulatory and legal frameworks, complicating the delivery of interventions.

Recently, the provision of HIV prevention services in England has been disconnected from HIV treatment and care. Whilst the latter is delivered by the NHS, local authorities are responsible for delivering prevention through a commissioning process, with central government funding. Though public health budgets are ring-fenced, HIV prevention competes with the provision of other sexual health services.

In a process that started back in the 70s HIV prevention is another public service left to the market and competition to deliver. Willingly or not, local organisations, many of them charitable bodies, have been turned into service providers competing for funding and striving to position themselves as provider of choice and market leader for the delivery of HIV prevention, alongside their charitable mission.

For some time now the provision of health services has been fashioned by market values rather than public health values, which raises questions of governance and accountability. The marketization of prevention can lead to conflict of interest, weakening the independence of service providers and diverting their efforts away from their primary objectives – because this is where the money is – or even take them out of the picture.

Competition has become tougher with the amount spent on HIV prevention shrinking from £55m in 2001/2002 to £10m in 2014/2015. Funding for HIV Prevention England (HPE) was expected to be cut by one-half in the next financial year. Diminishing investment in prevention, and the prospect that the ring-fencing of public health budgets could be withdrawn, could lead local authorities to invest even less. The picture is bleak for the future delivery of HIV prevention in England and the UK.

In line with the Department of Health vision, primary HIV prevention has mostly consisted in expanding health promotion and rolling out behavioural change interventions aimed at improving condom use and increasing testing. One in five people living with HIV are unaware of their infection. Undiagnosed infections are a driver of the epidemic especially in the early months post infection where viral load is high and this is why testing is important.

More than one million HIV tests were performed in clinical settings in the UK in 2013. Testing was further expanded with community interventions and dedicated events such as HIV testing week. Consequently, the number of people tested has been growing steadily; for example, more than 4 in 5 STI clinics in England achieved a testing coverage of 80% or over among MSM attendees.

However, SIGMA researcher Ford Hickson reported during the HPE conference in February 2015 that despite HIV testing increasing among MSM in England, safer sex knowledge has declined – so are we perhaps “putting all our prevention eggs in one testing basket”? Data suggest that those individuals testing more often are those who remain HIV negative and that those who should be testing more regularly are not reached by current interventions.

Fragmented and rarely aligned with local needs (as noted in a 2015 National AIDS Trust report on HIV Prevention in England), the emphasis on delivering primary prevention fails to address the multidimensional nature of the epidemic and the structural factors that foster it. It also a fails to acknowledge and incorporate the scientific achievements of the recent years in HIV prevention into service delivery.

Many gaps need to be filled to improve HIV prevention. A worthy start would be addressing the serious lack of appropriate and relevant sexual education in schools, which leaves adolescents unprepared to live and lead fulfilling sex lives, whatever their sexual attraction. This may be changing for the better when, and not if, sex education becomes statutory. Further changes are afoot with Public Health England’s recently released 2-year plan for promoting the health and wellbeing of gay, bisexual and other MSM.

A way forward must also be found to ensure delivery of clear, unbiased, non-judgmental, non-stigmatizing, and consistent prevention messages. HIV in the UK is no longer a death sentence; scaremongering messages of the ‘80s are nowadays irrelevant and meaningless for the younger generations who have never seen someone with AIDs, and for the older generation who are witnessing their peers with HIV living normal lives thanks to effective and safe treatments.

«How to craft relevant prevention messages to raise awareness of HIV in the UK?»

And herein lies a major problem for service providers – how to craft relevant prevention messages to raise awareness of HIV in the UK? On the face of it, HIV treatment now consists of taking a pill a day without major side effects, although this comes at the substantial cost to the NHS of £1.2 billion a year. How can condoms be presented as a relevant and attractive prevention tool when those who are on treatment and have a controlled viral load are no longer considered infectious? How are the relative impacts of other STIs and lifelong HIV treatment best communicated when treatment is freely available in a nearby GUM clinic?

The science behind the prevention of HIV infection is complex and service providers are often poorly equipped to keep up with progress; pre-exposure prophylaxis (PrEP) is a prime example of this. First demonstrated to be effective for the prevention of HIV infection in MSM in 2010 by the seminal iPrEX study, it took three years for the leading UK charities to formally acknowledge its existence and relevance – which they did in a timid statement of support for more research before it could be considered as an option for HIV prevention in England. Meanwhile, the US health regulator (FDA) had approved Truvada for HIV prevention in 2012, and soon it became apparent that the majority of prescriptions were written for women, although the drug had been tested in MSM.

It took another 2 years before the results of the English PROUD and French IPERGAY studies presented in February 2015 during the CROI conference showed that PrEP reduces the risk of infection by 86%. Concerns in the UK that PrEP effectiveness may be compromised in the real world “were completely unfounded”. Nevertheless, several months and maybe years will go by before PrEP is eventually available on the NHS.

The UK has been criticised for lagging behind other countries when it comes to making PrEP available. Unfortunately, the UK lacks strong HIV advocacy of the kind found in countries where public health services are not as good as that provided by the NHS. That service providers can be dependent on government funding also limits the vital function of these organisations in questioning public health strategy. Rather than pulling back from a challenging dialogue, Public health officials, commissioners, and also services providers, should engage more frequently and earlier with each other and with the public at large.

People’s agency in environments that are socially and culturally constraining needs to be better understood. Stigma and discrimination contribute to increasing rates of infection, but they are structural products, the root causes of which are not addressed by primary HIV prevention. Our rapidly changing environment has made sex a commodity available at the tip of a finger. There is often no time, or will, to discuss protection.

Interventions need to be relevant to the context in which they are delivered and the people they are aimed at – testing and condoms as one-size-fits-all answers do not always work because there are other imperatives to satisfy (and not only sexual ones). Mental health, drug use, economic constraints, homelessness, health inequalities are ignored by current prevention with its cubicle approach focused on changing peoples’ behaviours rather than changing the environment that creates these behaviours.

Many small organisations are providing a range of services that are very relevant for changing the course of the epidemic. But impending budget reductions and the current commissioning process thwart the work of organisations delivering harm reduction projects despite their proven success.

The number of new infections may seem to decrease overall, but the lack of changes in key populations should motivate the government to invest more resources, not less, in HIV prevention. Competition between services providers should be abandoned in favour of a joined up strategy with a broader scope of interventions beyond HIV testing and condoms. There is also a need to engage with a broader range of stakeholders and refocus prevention efforts on HIV as a part of people’s life not as their life. As Lord Fowler observed “no one has had the wit (or the money) to develop an effective campaign for the second decade of the twenty first century”. This demands political will and attention, which as we approach a general election may not be a priority for our politician. But demanding it is part of getting it.