The much awaited Department of Health announcement of the “Modernisation of HIV rules to better protect public” is finally available online.

In this statement Chief Medical Officer Professor Dame Sally Davies announced that “outdated rules designed to combat the threat of AIDS in the 1980s […] will be modernised in line with the most recent science.” (emphasis mine).

The modernisation first targets the repeal of the ban on doctors, nurses and other skilled healthcare workers with HIV but who are receiving treatment, to take part in certain medical procedures. This is in line with recent randomised trials among which HPTN 052 that have shown that HIV infected people receiving treatment and with an undetectable viral load, had a greatly reduced risk of transmitting HIV to their partner. It also comforms with the 2008 Swiss statement on the infectiousness of HIV people on ART. So far, so good.

HIV Home Testing regulation will also be “modernised”, which is a welcome move, but not for the reasons mentioned (See previous posting in this subject, here and here).

The response to the announcement has been a cautious welcome. Notably, the position of BHIVA, the leading UK professional association representing professionals in HIV care, was not accompanying the DoH statement but released separately.

Indeed BHIVA issued a response in which the Chair David Asboe welcomed “the availability of regulated HIV self-testing kits, while noting two important caveats” related to the accuracy of the test and emphasising both falsely reassuring negative results and unduly worrying false positive. Whichever necessitated confirmation in a traditional setting.

Accuracy of testing in an unsupervised environment is a critical factor to the success of the approach. A modelling paper presented at the CROI 2013 Conference in Atlanta showed that the introduction of the OraQuick home test could led to an increase in HIV prevalence among San Francisco MSM[i] (as always, all models are wrong but some are interesting).

The BHIVA Chair also warned against HIV Home Testing being used “as a substitute for the expanded testing currently available in healthcare and other settings, and that the transfer into high quality, specialist care of someone who tests positive is monitored.”

The statement from the BHIVA Chair then concluded that “it is crucial that we evaluate the effectiveness of this policy in reducing undiagnosed infections without unwanted effects on behaviour, psychological wellbeing, and uptake of broader sexual health services.”

One would have thought that if the change in law were indeed based on “the most recent science”, data on the effectiveness of home self-testing would already be available.

Positively UK, a charity championing the rights of people living with HIV also welcomed the change adding that “It is vital that people testing for HIV have access to help in coming to terms with their diagnosis, coping emotionally, and managing their medications. While its good news that home testing will be available, the Government needs to understand the importance of those testing kits providing accurate information and signposting, and for support services to be in place for those who do test positive.”

In this regard, it should be common sense to listen to people who went through it.

Signposting will indeed be critical as the first step for newly diagnosed to enter care. At this stage it is very unclear what this signposting will consist in and we should keep in mind what happened with NHS 111.

In their response to the DoH announcement, The National Aids Trust, one of the charities that was lobbying for the change in the law with The Terence Higgins Trust wrote that,

“We will be working closely with the Government to ensure that all tests introduced are of a high quality and provide accurate results; that the test comes with in-depth and relevant information about HIV and that there are clear processes to ensure that those diagnosed are effectively linked into HIV support and care.”

To its credit NAT, has produced a very useful report into Home Testing in 2008 which is still very much up-to-date.

The Terence Higgins Trust only issued a sibylline statement from its departing Chair Nick Partridge to say that “So long as the right safeguards are in place, there is now no reason […] why people who would prefer to test at home should be denied that chance.”

But there was no real need to add to the waxing lyrical statement of a THT Senior Executive published a few days before the official announcement.

The tail wagging the dog

When asked on Twitter to provide evidence supporting the repeated statement that if home self-testing was available more people would get tested, more HIV infections would be detected and more infections would be prevented, Professor Kevin Fenton (Director of Health and Wellbeing at Public Health England, PHE), referenced “THT research” in this area.

First, I would like to very warmly thank Prof Fenton to engage on Social Media. The same cannot be said of a number of those who have been challenged on this matter and have remained silent. Maybe they forgot that Social Media, which they are prompt to promote as the answer to all our problems, are a two-way communication system.

Second, it is rather surprising to see (very) grey literature being referenced as the basis for such an important change whilst scientifically collected evidence is available on the subject (see here and here and here and here). But let’s look at the evidence quoted to support the decision to change the law (hopefully only in part, Prof Fenton also referenced Lord Fowler’s Report) .

In 2010, THT conducted an online survey which is summarised here as follow (full report here):

It is worth noting that this study was a survey advertised on social media and conducted via Survey Monkey.  How representative this survey is, is without a doubt questionable. There is a non-negligible potential for a selection bias both because of the medium chosen to conduct the survey but also by selecting respondents who are more inclined to use or be interested in home testing. That half of the respondents where MSM points towards such selection bias, and that is only one of the possible bias (geographical location being another one, but the data is not available).

There are causes for great concerns if changes in law that may have a huge impact on Public Health are based on this kind of evidence, i.e. on 309 unrepresentative people saying that “they would consider using HIV self-testing kits if they were legalised”.

However, there could be new data available if THT and Public Health England were to make them available. Since January 2013, THT claims to have distributed 9,000 self-sampling kits (which are not to be confused with self-testing kit). How many have been returned? How many new infections have been diagnosed? What percentage of newly diagnosed have been linked to care? THT and PHE have the data and can publicise them anytime.

There is no doubt that the legalisation of HIV Home Test Kits is the right thing to do. The main reasons are threefold:

But what cannot be said is that the legalisation of HIV home testing will:

And the reason none of the above can be said or claimed is very simple: there is simply no data arising from “the most recent science” to support any of these statements (happy to be proven wrong). And I’d like to conclude by quoting again a 2013 scientific survey of the literature on self-testing:

“Both supervised and unsupervised testing strategies were highly acceptable, preferred, and more likely to result in partner self-testing. However, no studies evaluated post-test linkage with counselling and treatment outcomes and reporting quality was poor. Thus, controlled trials of high quality from diverse settings are warranted to confirm and extend these findings.” 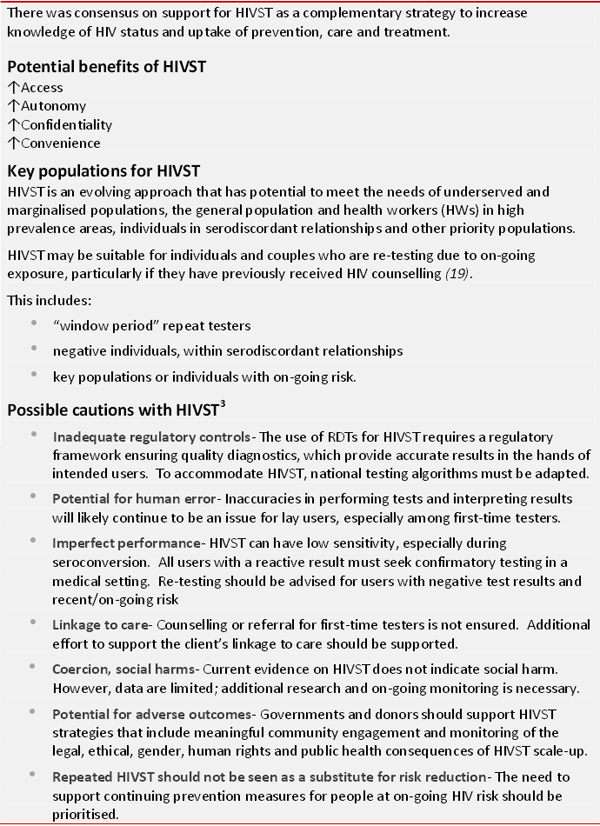