Don’t we all know that popping pills is not the solution to all our problems? The writer reflects on his and other’s assumptions about the role of biomedical interventions in the control of the HIV epidemic.

This blog’s title mirrors that of Jake Sobo’s “Why Treatment as Prevention Isn’t Just a “Biomedical” Intervention”. Reading Jake’s post I thought he was mistaken on one points and slightly disingenuous on another.

The first point being that those who are working in the HIV prevention field know very well that the Test and Treat or Treatment as Prevention (TasP) strategy is not just a biomedical intervention and that to be successful it requires both a huge investment in infrastructures and also tremendous socio-cultural changes (read a good recent summary here). However, implementing TasP as a biomedical intervention for the prevention of HIV transmission consists in building on something already being done. Millions of people have been put on HIV treatment and the rate at which more HIV-infected people are being put on treatment is growing quickly. In this context, implementing TasP entails doing something we know how to do, only better and on a larger scale; TasP implementation is then a logistical problem that once solved will drive the socio-cultural changes it requires to be successful.

The second point being  that Jake is one of the very few beneficiary of Pre-Exposure Prophylaxis (PrEP) which personal benefits he extols on his blog My life on PrEP. PrEP is just another ARV-based biomedical intervention which presents the same difficulties as those described by Jake for TasP and which is as difficult if not more to implement than TasP. Indeed PrEP is an intervention that has much in common with TasP, with a major difference: it targets people who are not sick but have to behave as if they were for the intervention to work. As trivial as it seems, that difference positions them worlds apart.

Jake presents the reality of TasP using the inverted pyramid that has become a standard feature to illustrate the failure of the cascade of HIV care in the US. It would be interesting to find out how the cascade of care would look like for PrEP (see below) starting with the 275,000 men whom the CDC thinks would be suitable PrEP users (there are most probably more people who would benefit from PrEP, but these are those that fit the CDC criteria for PrEP based on clinical research) 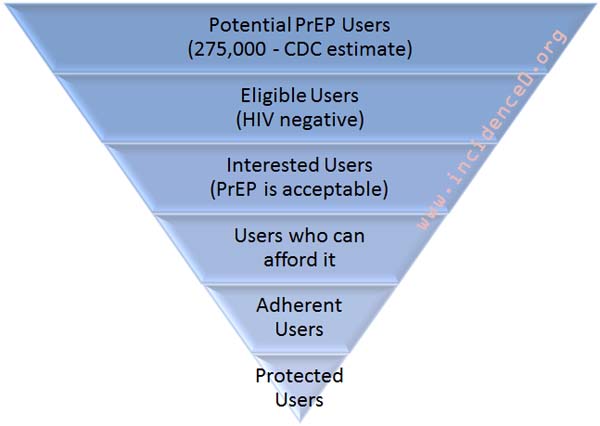 Pitting PrEP against TasP is a passé academic argument that is no longer the object of circus-like debates. The comparison is no longer pertinent since neither TasP nor PrEP are believed to be a magic bullet by those who developed them and who think they alone can subdue the HIV epidemic.

However, for both PrEP and TasP, getting tested for HIV is a prerequisite to accessing the ARVs at the heart of these new prevention strategies.

This is were a recent publication exploring why people who inject drugs (PWID) in Thailand avoid HIV testing challenged my belief that the research field really understands the importance and weight of the political and socio-cultural factors necessary for the success of any biomedical interventions.

The starting point for this reflection was the Bangkok Tenofovir IDU study which reported in June 2013 a 49% reduction in risk of HIV acquisition amongst PWID. The controversy of that study was not in that it was testing PrEP as a biomedical intervention, but that it was conducted in a country where syringes exchange is illegal and whose approach to drug users is either to imprison or shot them.

The Bangkok PrEP study has always been controversial before and during more than after it was conducted, the relative success of the trial pushed critical issues aside. But the research led by Julio Montaner from the British Columbia Centre for Excellence in HIV/AIDS in collaboration with the Thai AIDS Treatment Action Group in Bangkok somewhat shook my trust in the wisdom of some scientific boffins. Did they know of this work and whether they had or not, should the results have tempered theirs, the media and some advocate’s enthusiasm for biomedical interventions and their immediate roll out?

In the study conducted by Liamping Ti between July and October 2011, 350 Thai IDU residing in Bangkok or adjacent provinces were recruited into a cross-sectional study aiming at identifying the characteristics of PWID who avoid HIV testing. As pretty much everywhere, PWID are stigmatised and ostracised in Thailand. The prevalence of HIV amongst PWID has remained between 30 and 50 % during the last 20 years and the combination of the “war on drugs” which killed 3,000 people (PWID and others) and access to health services being dependent on an HIV test in many cases, many PWID are avoiding getting tested for HIV.

The researchers observed that 13.4 % participants reported avoiding HIV testing. This behaviour was positively associated with a number of behavioural factors, including injecting once or more than once per week (OR = 2.44; 95 % CI: 1.25–4.73), and having lent or borrowed syringes (OR = 2.19; 95 % CI: 1.07–4.47). These behaviours have been shown to be a significant route for HIV transmission among IDU and central to the spread of HIV at population level.

If, as it is with the epidemic amongst MSM, a small group of people unaware of their status are responsible for a very large majority of new infections, the importance of behaviour and of HIV testing  in the success of PrEP amongst PWID in these settings could not be emphasised more.

The research identified a number of reasons for PWID to avoid HIV testing, including the fear of an HIV-positive test result, the fear of being stigmatized and discriminated against by the community, and feelings of shame. They also noted that “The fact that Thai public hospitals register information about active drug users may also contribute to the reluctance on the part of IDU to access healthcare.”

Without a doubt, and even with its caveats that can only lead to a higher proportion of PWID avoiding HIV testing, this study should temper the optimism, that of this writer included, that surrounds all biomedical interventions, and the confidence of all those, this writer not included, who think that we can end the epidemic within a generation.

These results strongly stress the need to appreciate that what will drive us out of the epidemics is first and foremost a change in the political and socio-cultural conditions that are driving the epidemics.

We may have the tools to treat ourselves out of the epidemics but we won’t succeed without the realisation that the world out there is not propitious for these tools to be used for the best and that the prevention revolution that started two years ago is still lacking the political will needed to affect change on the necessary scale.

Too often there is a perilous disconnect between different areas of research, and despite growing evidence that are more than ever difficult to ignore, thinking and researching in silo remains standard practice.

To conclude. I echo Jake Sobo’s view that “there is so much more at stake” in HIV prevention, be it TasP or PrEP, than drugs and behaviour and that ignoring or playing down the importance and weight of socio-cultural environments on the success of the tools and strategies we now have can only lead to their failure at the implementation stage.