A survey conducted by SIGMA Research is the first to provide some insights into the prospective attitude of gay and bisexual men towards PrEP in England following the release of the iPrEX study in 2010. 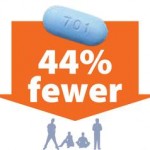 Knowledge of PrEP, its acceptability, dosage preference and potential effects on sexual behaviours was assessed using a panel of 1,500 men sexually attracted to other men representative of a broad range of sexual lifestyles and behaviours recruited predominantly through gay dating websites.

The survey was designed to investigate PrEP acceptability from a treatment perspective rather than as a new HIV prevention strategy. This subtle distinction, reflected in the survey title “Would you take a pill BEFORE sex to reduce your risk of getting HIV?”, sets PrEP in the context of a medical intervention rather than a behavioural intervention.

The first remarkable finding is that 80% of the respondents did not know about Pre-Exposure Prophylaxis before being surveyed, suggesting that the results of the PrEP trials have not spread outside the microcosm of research and advocacy (a similar figure was reported by surveys conducted before the result of the iPREX study, see this report for a number of references). This is an important message to be taken on board by advocacy organisations supporting a rapid implementation of PrEP for MSM. Their proposal would gain in strength if they could garner support from prospective users.

And indeed, more than 52% of gay and bisexual men surveyed said that they would consider using PrEP if it was offered to them, and even more (66%) were open to the idea of proposing it to others even if they would not use it personally. Socio-economic factors did not seems to impact PrEP acceptability but remarkably, men who had a regular partners in the last month were least likely to consider using PrEP. This is an important finding considering that  research shows that HIV infections often occur in the context of a stable relationship, which current CDC guideline for PrEP use by MSM (the only one available at the time of writing) do not identify as a priority target. Further, having a regular HIV positive partner did not increase the willingness to consider using PrEP, downplaying the complementary role PrEP could have if used with other HIV prevention strategies (also known as the “seat belt and air bag” metaphor).

Reasons for not considering using PrEP revolved around user’s perception that they were not at risk and that they prefer to use condoms which they believe provide more protection. Lack of effectiveness to prevent other STIs and “perceived ineffectiveness at preventing HIV” as well as cost (in terms of side effects, hassle, public health cost) and a sense of personal responsibility were also evoked .“Taking PrEP in order to take sexual risk conflicts with some men’s notion of themselves as responsible people” noted the report. UK prevention strategies emphasising and building up MSM’s ability to take control over their (sex) life may play a role in the perception that taking PrEP could be associated with an irresponsible behaviour.

PrEP was mostly seen as providing added protection for those who said they would consider using it. “Many men envisage the only situation they would need PrEP in would be a situation they would never put themselves in – serodiscordant UAI” the authors observed . This added protection was recognised by both those using condoms and by those engaging in risky sex. For the latter PrEP would not change their sexual behaviour but was perceived as a mean to reduce the risk associated with it, suggesting that providing PrEP even to those with risky behaviour would not necessarily lead to an increase in condom use as some are suggesting.

PrEP was also perceived as an enabling strategy for those who can’t have the sex they want because of the higher risk of infection associated to it. In that case, PrEP could make a contribution to prevent new HIV infections though it could also encourage men to engage in practice they were so far refraining to engage in and therefore negate the potential of PrEP which offers only partial protection against HIV infection.

Effectiveness was a key factor when considering using PrEP or making it available to other. Men who said they were unsure if they would consider using it (30% of the respondents) became even less sure once explained that “the drug would not give people 100% protection against HIV.”

Knowing about PrEP relative effectiveness did not affect the response of those who said they would consider using it. This is not unexpected since those are seeing PrEP as an additional protection, not a substitute for  condoms that they are already using. This is another important finding for policy makers since for PrEP to have an impact at population level it needs to be used by those who are currently not using an HIV prevention method.

Potential behaviour changes related to PrEP use was further investigated and a very large number of respondent (906/1259) responded unequivocally that PrEP would not impact on their sexual behaviour, whichever it was, echoing the response from those who would and would not consider using PrEP. The former are already using condoms, the latter are not and PrEP could be used in lieu in their case, and no change in behaviour was anticipated by theses respondents. Some respondents expressed the concern that PrEP could change their currently safe behaviour toward a less safe behaviour, however they were “hoping it would not”. In that respects, mathematical modelling showed that risk compensation (disinhibition) could work against the protection offered by PrEP.

Though limited in space and time this survey provides some important insights:

On the whole the balance between the perceived low benefits of PrEP compared to existing protection approaches and its perceived high cost casts PrEP as an added protection tool for those who already use condoms, and as a potential tool to reduce risk for those who don’t and who recognize its role as sexual enabler (thought they accept it would not entirely relieving the need to use other preventions strategies).

This survey somewhat reinforce the idea that PrEP is a niche intervention which would not necessarily be most appropriate or effective for gay men. However, much more research is needed to surface and understand attitudes towards PrEP amongst gay men in different settings and contexts and beyond in other populations, as these will be critical to determine who will benefit most from PrEP.