It has now been 6 months since the PROUD and IPERGAY clinical studies investigating Pre-Exposure Prophylaxis (PrEP) for the prevention of HIV infection had to change course due to the success of the antiretrovirals (ARV) used in these trials to prevent HIV acquisition in HIV negative men who have sex with men (MSM). A success that was later calculated as an 86% reduction of the risk of HIV infection in these studies assessing daily or peri-coital use of ARV(1)for HIV prevention.

Six months later and (is it worth stating it again?) four and half year after the results of the iPrEX study which first demonstrated the effectiveness of oral ARVs for HIV prevention, PrEP is still not available outside of the US where its use for HIV prevention was approved by the FDA in 2012.

The good news is that HIV/health activists worldwide are making more and more noise about PrEP and it being unavailable.

Campaign by Victoria AIDS Council in support of PrEP (Australia) 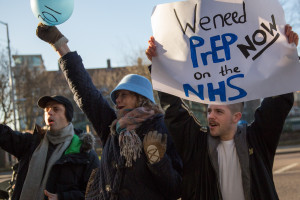 And PrEP users, though frown upon at first by a section of the MSM community, are now confident enough to advertise that they are “on PrEP” in the US were it is available.

Looking at the UK, the not-so-good news, is that Public Health bodies have done little to actively engage with the people and communities they should be engaging with and are failing to effectively communicate what they are doing about PrEP (2). This is at the detriment of a proper and efficient future roll out of PrEP.

Meanwhile it is known that some people are accessing PrEP legitimately and in a supervised environment as it should be through practitioners willing to prescribe it to users able to afford it or in an unsupervised environment though friends, PEP (Post Exposure Prophylaxis) or by buying it online. The reality of “wild” PrEP use, i.e. use of PrEP without medical supervision, and its danger for public health should not be underestimated or ignored by officials. But again, it is difficult to figure out what is known and being done about it.

There is an interesting parallel to make with HIV home testing. A year ago, the government lifted the 1992 ban on the sale of HIV home testing kits. These are diagnostic kits that can be used by people “in the comfort of their home” to self-diagnose HIV infection (not to be confused with home sampling). This, government ministers and Public Health bodies announced with fanfare and the promise that this will change the course of the epidemic in the UK. A year later there are still no HIV self-testing kits approved by the regulator for use in the UK(3).

Every month 500 people become infected with HIV in the UK, and whilst home testing could contribute identifying these infections, PrEP could contribute to prevent them. Lest we loss the momentum, pressure should continue to be applied to ensure PrEP will be made available and those who can make a difference should not be left of the hook for not acting urgently on evidence.

A general election is fast approaching with the NHS at the heart of many parties’ manifesto. It is time to ask those who have been in charge and their contenders questions about what constitute good public health policies and if they think they have what it takes to act towards putting an end to the HIV epidemic. Rolling out PrEP or withholding it, is one such policy that begs the question.

EDIT 24 April 2015: It appears that a self-testing kit is now available in the UK. On the 24th of April Biosure, a UK based company, announced that their device based on antibody detection (and therefore with a three months window period) had received the CE mark. The kit is now available online for GBP29.95. More on this later. In the meantime check this post on choosing an HIV test.

(1) whilst Ipergay was designed to assess PrEP efficacy, PROUD was designed to assess the feasibility of conducting an efficacy study. However the results were so much better than expected that efficacy data were obtainable.
(2) a few features in mainstream gay media are laudable, but do not adequately fit the definition of community engagement.
(3) which is not necessarily a bad thing as regular reader will know.

What’s next for PrEP in the UK?

86% risk reduction: Is it finally enough for PrEP to be made available in the UK?
Tagged with: ARV, Community, HIV infection, HIV Prevention, IPERGAY, MSM, politics, PrEP, PROUD, Truvada